The managerial reign of Josef Venglos at Celtic is viewed by some as a period best forgotten, a dark age where little good happened and ambition was severely limited. And in some ways, this was the case, although it would be unfair to lay too much of the blame at the door of the good doctor. These were times when the infamous biscuit tin was kept firmly in the cupboard.

So when Celtic paid £200,000 for a 33-year-old Slovakian midfielder, there was much rolling of eyes and a distinct air of ridicule among the denizens of the Scottish football media. An old pal’s act? After all, the selling club was Duisburg, hardly one of the household names of German football. Besides, the player in question, Lubomir Moravcik, had only played five times for them.

Moravcik, though, had a past worth considering. Those with less parochial attitudes recalled a talented Czechoslovakia team being one of the more entertaining sides in a generally grim World Cup in Italy in 1990. There had been almost 200 appearances for one of French football’s elite clubs, St Etienne, and almost a big money move to Marseille before injury intervened.

But this was in the past. Clearly, there was a gifted footballer here, but had the best-before date come and gone? Sceptics – and there were many – folded their arms and stood back to watch. His Celtic debut caused a few eyebrows to head skywards, usually accompanied by approving nods.

Admittedly, the opposition was merely a pretty dismal Dundee side, but Moravcik showed, in a 6-1 thrashing, that while he may not have been a player of the lightning-pace variety, he had a touch that was something of a rare beauty in the macho, leg-biting world of Scottish football.

The Dundee match was merely a prelude. Two weeks later, Moravcik would play in his first Old Firm derby. How, cynics wondered, would this small, slight man cope? Twinkling feet may have defeated Dundee, but Rangers were altogether a different story.

It didn’t even take the full ninety minutes to dispel the grim thoughts of the doubters. Moravcik, the best player on the pitch by the proverbial country mile, scored twice and controlled the game as Rangers were blown away. The 5-1 scoreline was somewhat flattering to the visitors. 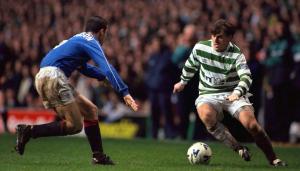 Moravcik befuddles Rangers (not for the last time)

And now, it was no longer ‘Moravcik.’ In a bare couple of weeks, the Slovakian was now simply Lubo. And Lubo he would remain for the rest of his Celtic career. The only disappointment, not only for Celtic fans but also those who love wonderful football, was that his time was limited by age. If only he could have arrived a couple of years earlier…

There are very few footballers one can watch and be genuine uncertain as to which foot is the stronger. Lubomir Moravcik was one of them. A corner kick on the right. Let’s try an outswinger. Another corner follows. Okay, let’s make this one an inswinger. And it wasn’t for show. Every piece of skill, every feint, every trick, there was a meaning. And it was a sheer pleasure to watch.

It took until 2001 before Celtic at last got past Rangers and won the league title under Martin O’Neill. In fact, they won the treble and those honours were the first in Moravcik’s long career. It would be harder to think of a more deserving player.

Lubo and Larsson – not a bad combination

Celtic would retain their title the following season, but by now, Moravcik was running out of time and it was to be his last at Celtic. He did, however, get the opportunity to play in the Champions League, another fitting honour.

Lubo Moravcik played 94 league games for Celtic, scoring 29 goals. Overall, he played 129 times, scoring 35 goals. He also won 42 caps for Czechoslovakia and 38 for Slovakia. In the often thud and blunder world of Scottish football, he was a fine and polished diamond.