Budapest is really two cities that face each other across the Danube. For those familiar with the north east of England, this is rather like creating a single place called Newcastlegateshead. It may seem absurd, but Buda and Pest were separate entities until late in the 19th century.

In very simplistic terms, Pest, on the eastern shore of the river, is the flat part and Buda, to the west, is the hilly bit. Naturally enough, the castle is on the Buda side, overlooking the river and it is a fine place from which to view the Pest embankment and the Parliament building with its unrepentantly Gothic style.

The Parliament, built just after the merging of the cities, bears more than a passing resemblance to Britain’s Houses of Parliament. This is not a coincidence – the London building provided the inspiration for its Hungarian equivalent. 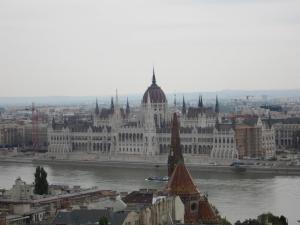 Back on the Buda side, the castle was initially constructed in the 13th century, but, as with almost any medieval castle, has been rebuilt and reconstructed on many occasions. A stylish little funicular can get you to the top of the hill to save the legs, if not the wallet. There are two particularly fine museums at the castle complex, the Budapest History Museum and the National Gallery, which is primarily devoted to Hungarian art. A Budapest Card will allow free entry to both.

There are cards that cover 24, 48 and 72 hour periods. If you’re on a city break or something similar, the three-day version is pretty good value. It costs about £25, which sounds a bit pricy, but you can travel on any public transport (including the airport bus) and it allows free entry to seven museums. The Museum of Fine Arts and National Gallery are also among the participating museums and most other museums offer some form of discount, so if you’re planning to enjoy a bit of culture, the card is very worthwhile. You can even have a free walking tour with a guide if you fancy it.

Walking in Budapest is, largely, a pleasant experience, with the caveat that there is always a lot of building work going on, so you won’t necessarily always be able to follow the map. Occasionally, something that looks like a straightforward walk might involve a bit of a detour.

Something that’s impossible to miss is the vast St Stephen’s Basilica. This huge Neo-Classical edifice took over fifty years to build, not helped by the collapse of the dome and the subsequent total rebuilding. It’s possible to ascend to the modern, rather safer, dome and enjoy a full view of the city.

Down at ground level, the Central Market is well worth a visit. It does, in fact, extend to three floors and the myriad stalls sell just about any kind of food you can think of. There are frequent ‘National days’ featuring foods from particular countries. The market is undoubtedly a tourist magnet, but locals shop here, which is as good a recommendation as any. There is more than food, with shops selling various craft products. Even vehement non-shoppers might grudgingly accept that this market is a pleasant way to spend an hour or two. 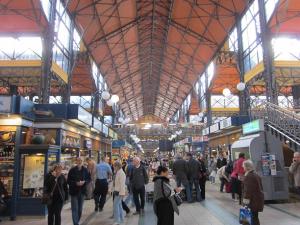 Bizarrely, one figure that you’ll encounter, thankfully only in statue form, is Ronald Reagan. The late American president never actually visited Budapest, but someone has seen fit to raise a statue of him. In a splendid piece of irony, Ronnie is left to gaze at a Soviet war memorial. 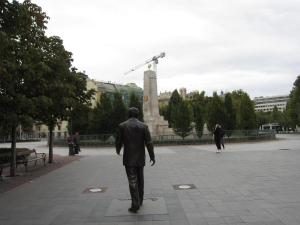 Ronnie wonders what the Soviets are up to now

There is certainly no shortage of things to see and do. Budapest has more than 200 museums and 40 theatres, along with several other concert halls. There is a large and varied collection of churches and Europe’s largest synagogue. Look out, too, for the glorious piece of Art Nouveau that is the Gresham Palace, once a residence for wealthy Britons associated with the Gresham Life Assurance Company, but now a hotel.

The Budapest Metro is not huge and most of it is on the Pest side of the river. It is, though, the second oldest underground railway in Europe, after the London Underground. There are currently three lines, with a fourth under construction. Oddly, the trains are all of different types on each line.

It’s worth taking a trip on Line 1 (yellow line), a relatively short diagonal that runs from the centre of Pest under the stylish Andrássy Avenue, terminating at the City Park. The little yellow trains and the rather quaint stations look as though they belong to a completely different era. The experience is rather like travelling on a small subterranean tram.

Once you’ve reached City Park, expect to spend some time there. Hősök tere (Heroes’ Square) contains a plethora of statues and monuments to figures throughout Hungary’s history, with the Millennium Memorial as its centrepiece. To either side of the square are two Neo-Classical art galleries, The Palace of Art (Műcsarnok), which holds temporary exhibitions of contemporary art, and The Museum of Fine Arts (Szépművészeti Múzeum).

The latter has an extensive collection of Egyptian antiquities (one of the largest in Europe), as well as an impressive Classical section. The highlight, however, is the Old Master collection, a veritable lesson in European art history from the 13th to 18th centuries. The Spanish collection is notable, with works by El Greco, Vélazquez and Goya. In all, there are some 3,000 paintings in this part of the museum.

Also to be found in City Park is the lavishly Neo-Baroque Széchenyi thermal bath complex, Europe’s largest medicinal bath. Thermal baths are something of a Hungarian speciality and the Széchenyi is a substantial affair with indoor and outdoor facilities.

If you’ve taken the yellow line metro, one option is to retrace the journey on foot, because Andrássy Avenue provides an interesting walk. The street is full of Neo-Renaissance buildings, cafés, restaurants and shops. The delightful Opera House is situated here and even if you’re not going to a performance, it’s worth simply popping in for a look at the richly decorated foyer. This is, indeed, the grand opera.

Another notable building on Andrássy is the House of Terror. This museum concentrates on the period of the 20th century when Hungary was under Soviet and Nazi control. It is certainly an interesting and thought-provoking museum, but a personal view is that the presentation is rather over-the-top, with its penchant for flashing lights and throbbing music. 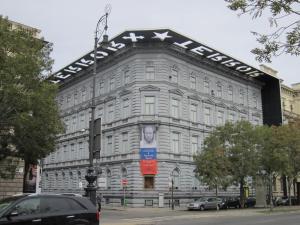 Budapest can be a little expensive in terms of food and drink, but it doesn’t have to be. As ever, the more tourist-orientated areas will cost a bit more, but even in the central part of Pest, there are plenty of places where you can find good value. Hungarian food tends towards the meaty, but most places have a vegetarian option and there are some very good Indian restaurants (the Indigo is especially impressive) where a filling meal and a couple of beers will give you change from a ten pound note.

There is a host of restaurants around Liszt Square, across from the imposing Academy of Music. Lovers of dark beer (Duck Holiday owns up) should consider the Bohemia Restaurant, which serves a few different beers including the tasty Prágai tavasz (‘Prague Spring’), a Czech-style dark beer that is friendly for session drinking. It’s a bit thin on the veggie options, but a cheese tapas selection and a few glasses of Prágai tavasz make for a very pleasant evening.

Budapest is unquestionably one of Europe’s great capitals, boasting many World Heritage sites and, of course, the magnificent Danube. There is never a bad time of year to visit a city this impressive.