On Edinburgh’s Dalry Road, there is a sculpture of two draymen rolling a beer barrel. It is set slightly back from the pavement and is probably not even noticed by the shoppers and office workers who hurry past it each day. The sculpture is a tribute to Edinburgh’s brewing industry, prominent in that part of the city.

The sculpture is notable because it is a rare example of this type of art in Britain. Of course, there are many statues, but street sculpture, with its underlying sense of humour, is not easily found in the UK. In Eastern Europe, though, it is much more prevalent. 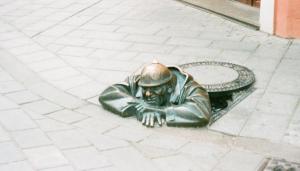 Perhaps the best-known location for the genre is Bratislava. The Slovakian capital has some fine and famous examples of the art. How many tourists have stopped to take pictures of the figure appearing from a manhole or snapped their friends sitting by the Napoleonic soldier leaning on a bench? It is certain that the rather seedy-looking paparazzo, sneaking a photo outside a restaurant, has in turn been photographed on thousands of occasions. 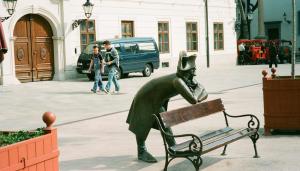 Take a stroll through Riga and you will encounter a rather Bohemian-looking character lolling against a park fence. The figure is that of Kārlis Padegs, one of Latvia’s most famous artists, who died from tuberculosis at the absurdly young age of 28. The statue stands outside the Vērmanes Garden in central Riga. 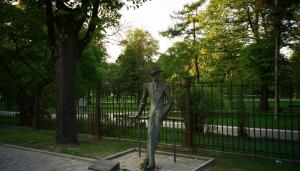 Skopje houses a riot of statues and monuments. Some of them, like the Alexander the Great statue in Macedonia Square, are magnificently over the top. Others, dotted randomly about the city, are just plain crackers. 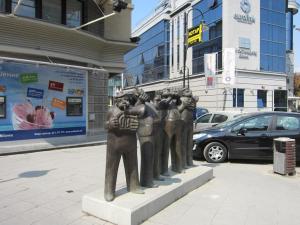 By the river, a woman is about to dive into the river. A friend has already taken the plunge, as we can see the feet of the previous diver. There are musicians, giant fish and all sorts of surreal lunacy. 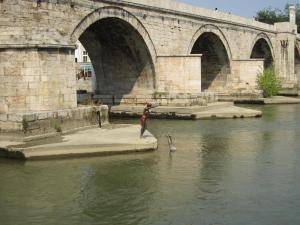 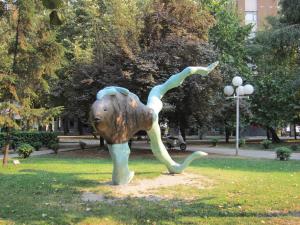 Skopje has a seemingly insatiable desire for statues of great historical figures, but in contrast to all this stands a sculpture of a trendy young woman in dark glasses, mobile phone pressed to her right ear. 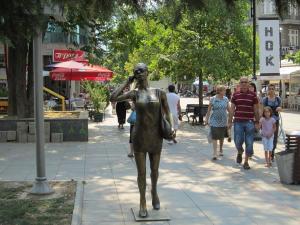 The Balkan region is a good source of strange artwork popping up in unexpected places. In Ljubljana, take a stroll through Tivoli Park and you’ll spot an elderly gentleman sitting on a bench. Nothing too strange so far, but glance to his left and a miniature version of the figure is perched on the arm of the seat. 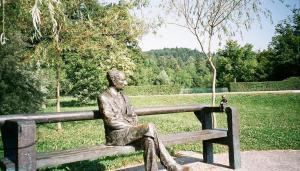 You’ve shrunk since I saw you last…

The new Butchers’ Bridge, across from the Central Market in Ljubljana, is even more zany. Adam and Eve, Prometheus and a startled Satyr vie for attention with a host of grotesque frogs, shellfish and other oddballs. The bridge has become a spot for lovers to attach padlocks, optimistically proclaiming their eternal love. 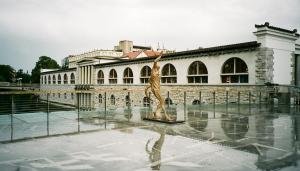 Sofia, by comparison, is relatively sober in its art. Even so, a walk through the City Garden might cause a little surprise as you encounter a muddy-looking car with a large head on its roof. Closer inspection reveals that the work is, in fact, a tribute to the Trabant, the legendary, if horribly inefficient, East German car. 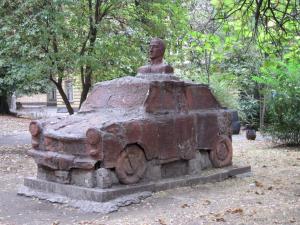 A Trabant breaks down

Finally, a couple of favourites from Budapest. A fat and rather pompous-looking soldier stands guard amidst the shoppers in the city centre, looking slightly like a Magyar version of Dad’s Army’s Captain Mainwaring. 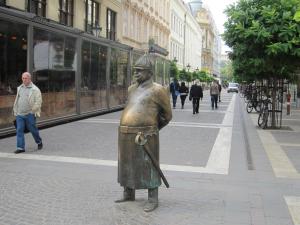 Another well-photographed figure in the city is the ‘Little Princess’, the girl reaching out to a dog to retrieve the ball in its mouth. The statue is in Vigadó Square, the small garden outside one of Budapest’s famous concert halls. 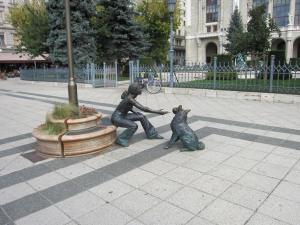 These works add something to their surroundings. There is, in the best of them, an undercurrent of humour. This is art that doesn’t take itself too seriously and that cannot be a bad thing.